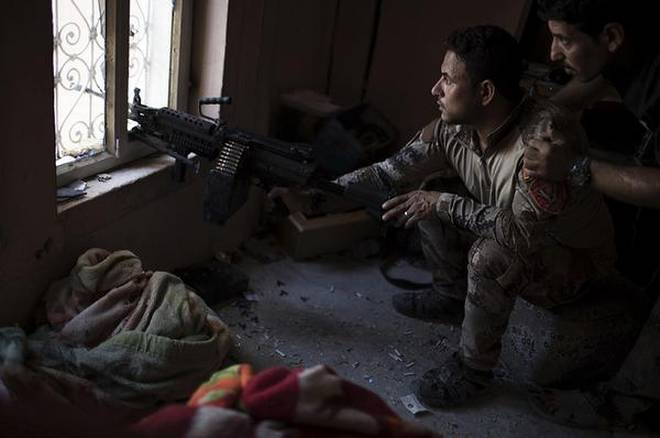 End of the Iraqi half of Islamic State is marked by liberation of Mosul. Now the focus has shifted to the group’s capital, Raqqa, in Syria.  Even thought the hard-line group would continue to control the southern and western parts of the city, the Mosul liberation would mark end of the Iraqi half of the IS caliphate. A Kurdish-led coalition backed by the US, has also besieged, Raqqa, the capital of Syria.

Yahya Rasool, the Brigadier General and spokesman of the Iraqi Military told the State TV that their fictitious state has fallen.

Enormous price has been paid for the Mosul battle. Besides this, estimate is that civilians in thousands have been killed and in addition many casualties in the military. The northern city’s prewar population, amounting to nearly 9,00,000, have fled the battle and taken refuge with friends, relatives and refuge in camps, state groups providing aid.

The battle has ruined many buildings, injury, death, deprivation and hunger in people trapped in the city.

On Thursday, in a ‘lightning operation’ Al-Nuri, the historic Mosque was captured by Counter Terrorism Service states a commander of the US trained elite units.

In the past few days, evacuation of civilians was done, through corridors. The Sirjkhana and Al-Hadba neighborhoods and mosque area is in control of the CTS units.  As per a military statement, they have not stopped advancing, however. From the Police and Army other government units have been closing in from other directions.

Around 20 children belonging to Yazidi and various other minorities are freed , says an elite Interior Ministry. In the quarter north of the Old City, insurgents had persecuted the children.

What This Girl Did To Her Molester On The Delhi Metro Is Something Every Girl...

10 Of The Most Dangerous Places To Live

Jaw breaking Photos of Bollywood Actress You never seen before.