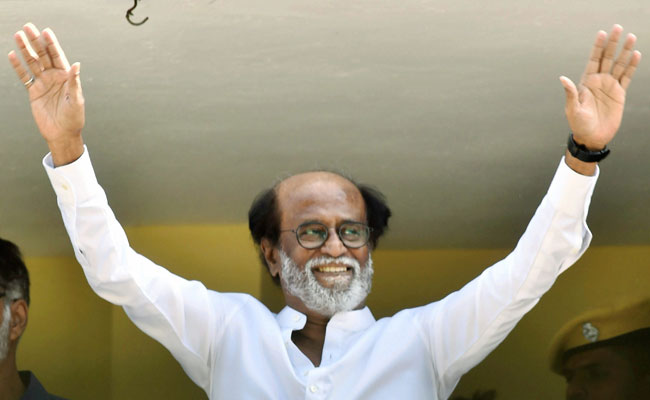 Chennai: The long suspense over whether Rajinikanth would enter politics finally ended today, with the superstar making the announcement amid frenzied cheers of hundreds of supporters. “I will do my duty… it is time. We will change the system,” the 67-year-old declared in Chennai, saying he would form a new party. Claiming that the events in Tamil Nadu over the last year have made the state a laughingstock, he said, “If I don’t make this decision now… the guilt will haunt me”. The death of AIADMK’s iconic leader J Jayalalithaa last December is seen to have left a vacuum in the state’s politics. The other big actor, Kamal Haasan, who announced his intention to enter politics last month, has congratulated Rajinikanth.

Rajinikanth said his party will contest all 234 seats of the state in the next assembly elections in 2021. The decision to contest the 2019 parliamentary elections will be taken at an appropriate time. His party, he said, would resign if it was unable to fulfil its electoral promises within three years of coming into power.

The actor said he was not entering politics to seek power. “The Chief Minister’s post came to me long time ago, I kept away. I did not have the intention of getting the post of CM when I was in my 40s,” Rajinikanth said. Over the last few days, posters came up in Chennai that say if Rajinikanth takes the political plunge, he would be the next chief minister.
The actor, who enjoys almost demigod status among his legion of followers, said he does not want cadres for his new party, but “watchdogs”. “I will be the head of these watchdogs… We should rope in all people in every village. This is my first task for you. At an appropriate time before assembly polls, we shall explain our policies and promises,” he said.

The BJP, which had given Rajinikanth an open offer to join, today congratulated him. State party leader T Soundararajan tweeted: “Welcome actor Rajinikanths political entry with motto of corruption free good governance which is the sole aim of BJP”. Earlier party chief Amit Shah has said Rajinikanth was welcome to join the party and Prime Minister Narendra Modi had met him during a visit to Chennai last month.

The death of Jayalalithaa unleashed a power struggle within the ruling AIADMK over the last year that saw a split between Chief Minister E Palaniswami and his predecessor O Panneerselvam, a patch-up between the two factions, and then a loss in the RK Nagar by-election.

The merged AIADMK lost the RK Nagar seat, represented by Jayalalithaa, to sidelined rebel TTV Dhinakaran, the nephew of Jayalalithaa’s closest aide VK Sasikala, who had laid claim on the legacy of the former Chief Minister.

Kamal Haasan, who announced his political ambitions last month, had challenged the ruling party for weeks, accusing it of corruption and bad governance and promised a whistle-blower app by January. This morning, he tweeted: “I greet Rajini’s social concern and political debut. Welcome welcome,” his tweet read.
Rajinikanth, who had not been so openly critical, had been cryptic about his plans. His pronouncement in May – “If God wills it, I will enter politics tomorrow” – had led to a frenzy.

Earlier this week, the actor, whose fans call him “Thalaivar” or “Ultimate Boss”, had given the strongest indication of his plans, saying entry into politics needed a winning strategy.
In 1996, Rajinikanth had asked the people to support the DMK government and not its charismatic opponent Jayalalithaa, famously declaring, “Even God can’t save Tamil Nadu if Jayalalithaa comes back to power again”. The DMK swept the state polls in 1996 but later the superstar later described as “a mistake and an accident”.

Mukesh Ambani Just Gave A Fitting Reply To A ‘Pretty’ Girl Looking A For A...

Suhana Khan with her dad Shah Rukh Khan in Party

These 10 Stunning Latina Ladies Will Drive Any Man Crazy