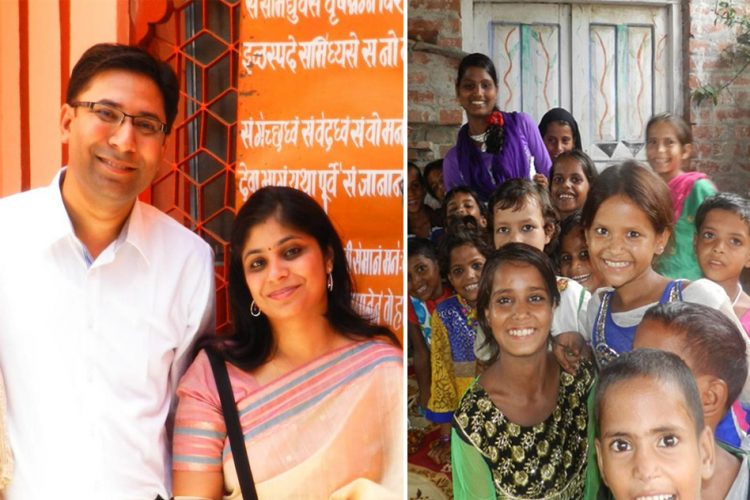 If we just think for a moment to give our children a considerable freedom to choose what to learn, how to learn, and to some degree, even when to learn, what do you think would happen? Would they ever bother to learn anything worthwhile? In pursuit of this quest, the couple – Rahul and Ridhi started Swatantra Talim. As the name reflects, not just freedom in education but the important principle is that children are motivated to learn and they have a choice over how and what they learn.

Ridhi, working in a corporate job got married to Rahul, a CA for ten years. Unsatisfied with her job she decided to quit and started looking to create more meaning through her actions. Always keen towards education, she began volunteering with Manzil (an NGO) on creating new and creative learning ways for children from low-income backgrounds. In 2011-12, Ridhi started going to a village in Sitapur district. One day Rahul accompanied her on the trip. Reaching the village, Rahul saw about 40-50 young girls waiting under the tree, as their eyes twinkled with hope.

The village was Ramdwari, 90 km away from Lucknow, where education amongst young children was not prevalent. The parents believe in an earning hand instead of education, and girls get married at a young age of 13-14 years.

Wanting to change this situation, Ridhi and Rahul thought about what they could do to contribute towards a change through education, and this led to the inception of Swatantra Talim.

Youth Alliance in their journey

Before they started their learning centre, they attended a program called Gramya Manthan, a 9-day rural immersion journey conducted by Youth Alliance. This helped them realise the mindset of villagers. One incident that stood out for Rahul during this period is a case where the villagers were asked why they did not want to use toilets. On talking to them he realised that it was not due to the lack of finances that they refused to build toilets, but because they did not like the idea of having a toilet where they lived. This helped him understand the difference in the mindsets and their point of view.

Giving Back to the society | The Journey

In July 2013, their first after school learning centre opened with 40 girl students. They started focusing on contextual learning with an intention of bringing high-quality education to the villages. The learning space was created to give exposure to art, craft, library, games and excursions. Seeing the girls flourish, Rahul and Ridhi began to think that for a progressive society, this model of education should reach both boys and girls.This thought led to the opening of boys learning centre in Aug 2014. In the beginning, the thought of boys and girls studying together unsettled the orthodox thinking community. So the boys learning centre was started separately. But gradually the centres were merged.

“Khoj Dabba” is a model for hands-on experiments in math, science, language and geography. They also had a “Khoj Gaadi” or a library where they had books to clear their doubts. The internet facilities are close to nonexistent, so a lot of online content is printed for them. The kids are also shown videos to build inquisitiveness. Another innovation was “Khoj Shaala”, a lab where the children were encouraged to think of problems in their daily lives and try and use their knowledge to overcome them. This motivated them to come up with solar powered phone chargers to overcome the electricity shortage and also lights for their bicycles powered by their pedalling, which was instrumental in providing more safety and in the prevention of accidents. The exposure is created for kids by taking them on excursions to museums and zoos. The first that they would be stepping outside the village.

The form of assessment is also different. Swatantra Talim set their vision of a democratic centre which meant that the student had complete freedom to choose what and how they want to learn. Also, democratic self-management accompanied with evaluation focussing on individuals, which means, education without comparison and grades and most importantly a place where children can grow at their own pace.

The biggest impact has been evolving of mindset. This was the biggest satisfaction. In a village where girls were forced to marry at an early age and where education was considered a waste of time and money, they are now coming forward and valuing education and encouraging their kids to learn. The kids are support to their parents in daily chores like opening bank accounts, teaching how to sign, countering daily problems with creative inventions, and slowly but steadily reaching out to their dreams, and turning them into reality. Just a glimmer of hope is enough to light a spark.

With #MySocialResponsibility, we aim to bring you more inspiring stories of individuals and organisations across the globe. If you also know about any changemakers, share their story at msr@thelogicalindian.com and we’ll spread the word.