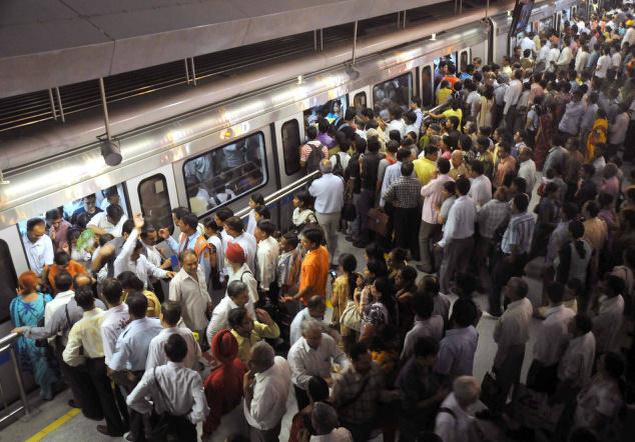 It was a Saturday afternoon I had lunch with a friend in Gurgaon before I decided to head home. The metro, for those who do not take it or do not belong to Delhi, can get crowded and air tight to an extent that the Tupperware guys could take inspiration from. I luckily managed to find a seat till Rajiv Chowk metro station (Connaught Place) where I had to change my train. The doors opened. By the way, I was in a regular and not the women’s only coach – why is this little detail important for this post? Well the answer lies ahead.

So where were we? Yes, the doors opened and people began to flood in. I tried to push and nudge my way out but with no luck. With a huge sigh I decided to get off at the next station – New Delhi. As I positioned myself close to the exit door, I felt a sense of unease run through my body, like someone has pierced their gaze on me or someone is watching me. Suddenly I felt something touch me from behind. With half my mind on trying to get off at the next station, I turned thinking it was someone’s bag or hand touching me repeatedly. I turned to see a man in a white kurta (long shirt) staring right at me and he had no baggage with him.

In fact, both his hands were clenching the railing next to him. But if both his hands were up there, what was it that… I got my answer as soon as I lowered my sight. There beneath that long shirt I could clearly see that this man was UNZIPPED. I felt the blood rush to my head, boiling and fuming, and fury ran through every nerve in my body.

Within that fraction of a second every single eve teasing incident and every darn face of those guys who had the guts to molest someone I knew, flashed in my mind. Before I knew it, my voice escaped my lungs and there I was, screaming at the man who had dared to mess with me.

‘KYA problem hai?’ (What is your problem?)
‘Kya samjh rakha hai saale?’ (What the hell do you think?)
‘Himmat kaise huyi teri?’ (How dare you?)

These were some of the things I uttered looking right into his eyes. He was startled and started blabbering that he is sorry and insisted that it was his hand that touched me by mistake. “Your ‘HAND’ that comes out from your pants? How the hell was your zip open?” I was screaming in a coach full of men and women. Did anyone come forward to help or even displayed basic courtesy to ask me what was wrong? The answer was a big, unsurprising NO. I turned and spotted two men, in fact, smirking at me. Their silence tried my patience and all hell broke loose.

I held that (namesake) man’s collar and dragged him out of the train. He was on a loop mode ‘It was my hand, it was a crowded train’. The moment we set foot at the platform he managed to escape. I ran, with all the strength and courage in me. I ran after him making as much noise as I could. A few saw (the tamasha), others gasped, while one man in uniform began to chase him. I went towards the other side and we managed to get hold of him. I yelled again :How dare you? How did you dare to touch me? People like you make Delhi a nightmare for girls! You make us question every time before we step a foot outside. HOW DARE YOU?“

People watched the guards dragging a man to the control room and a girl screaming at him. They only watched.

As we took him to the control room, he told the police that I was mistaken, it was his hand that touched me by mistake and it could happen to anyone because it was a crowded train. “Ask her… it was my hand”, he said. 15 guards, all men, turned towards me as he tried to shame me. But if he had the guts to do it, I had the spine to say it.

You see, anger brings out the strength you never thought you had in you. But in my case, anger brought out a language I never thought I could use! I was outright and I had all the right to be – “Lift up that kurta and you will know exactly what touched me”. There. I said it out loud and clear. The guards felt outraged and charged at him. Within seconds he begged for an apology, and suddenly, the hand in question transformed into a part of his body he wished he never had.

“Why would this girl lie? After all she is taking the blame on herself,” said the police officer to the criminal in front of me. He committed the crime, I raised my voice and yet somehow the shame was on me! That statement reflected the thought process of our society. In fact, it said much more. I argued with the officer and told the man in question that I have lost nothing in this entire episode, and in fact, I will make him pay for this. He immediately begged with an apology and I, instead, insisted on filing an FIR. After a few calls, five friends of mine reached the station to back me up. They were equally angered and showed no mercy.

We moved to Kashmere Gate police station and I slapped a sexual molestation case against him. He was arrested and put behind bars immediately. I decided to not let this one go and appeared at the court on Monday to record my statement in front of the magistrate. Meanwhile, this man has been moved to Tihar jail and will spend his time behind bars until he gets bail.

You see, there are several measures being taken to make our public spots and transport safe. Someone asked me as to why I did not take the women’s only coach? But honestly, that’s not a solution. These reservations in fact paint the idea that it is not ok or safe for women to be in public spaces. It’s debatable, I know, but are reservations really improving the situation? Then what would?

I think the answer lies within us. Unless women put forward that is not okay for someone to touch us and get away with it, nothing will change.

I could just bite the bullet and accept that I was eve teased or molested. Or I can raise my voice and instil fear in the criminal instead of victimising myself. If this man has the guts to unzip in a metro full of people, he probably started off by doing something less offensive to another girl. Her silence was his encouragement. Remember, every time you choose to ignore or walk away, you put someone else in danger.

So I urge women to respect their body and know that it’s okay for you to say that someone touched you without your consent and you have to muster the courage to reach out to the police. I insist. Please, for the sake of womanhood – SPEAK UP!