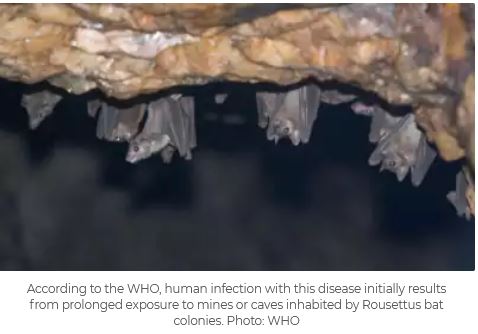 NEW DELHI: Guinea on Tuesday confirmed the first recorded case of Marburg disease in West Africa the World Health Organization(WHO) said. The lethal virus was found in samples taken from a patient who died on August 2 in southern Gueckedou prefecture.

The highly virulent disease is carried by bats and has a fatality rate of up to 88 per cent. The virus — which is related to Ebola — is passed from animal hosts to humans, like the coronavirus.

How is the Marburg disease transmitted?

After the initial crossover of virus from host animal to humans, transmission occurs through person-to-person contact, the Centers for Disease Control and Prevention (CDC) said. The transmission can then happen via direct contact to “droplets of body fluids from infected persons, or contact with equipment and other objects contaminated with infectious blood or tissues.”

According to the WHO, human infection with this disease initially results from prolonged exposure to mines or caves inhabited by Rousettus bat colonies.

What are its symptoms?

The symptom onset — after an incubation period of 5-10 days — is abrupt, and begins with fever, chills, headache, and myalgia. Those infected are likely to experience muscle aches. Nausea, vomiting, chest pain, a sore throat, abdominal pain, and diarrhea can begin on the third day after the onset. A non-itchy rash may occur on the chest, back, and stomach.

How can one be diagnosed?

Since many of the disease’s symptoms are similar to those of malaria and typhoid fever, making a diagnosis is difficult.
However, polymerase chain reaction, antigen-capture enzyme-linked immunosorbent assay (ELISA) testing, and IgM-capture ELISA can be used to confirm a case.

Is the disease treatable? As of yet, there is no proven treatment available for the Marburg virus disease. However, the CDC explained that supportive hospital therapy, maintaining oxygen status and blood pressure, replacing lost blood and clotting factors, and treatment for any complicating infections can improve survival.