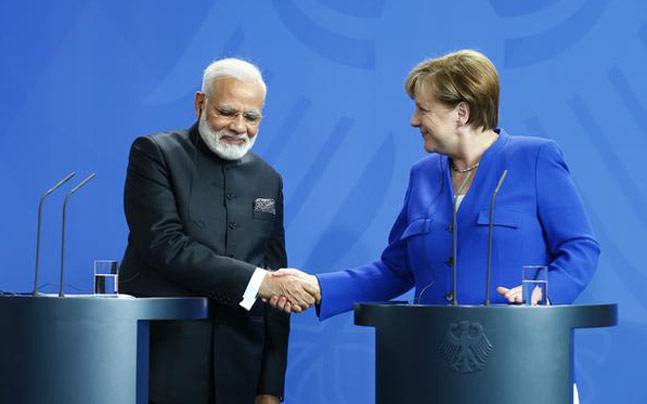 Prime Minister Narendra Modi while giving the joint statement with German Chancellor Angela Merkel in Berlin said, “Germany and India are made for each other.”

After holding talks on wide-ranging issues like trade, skill development, cyber security and terrorism, PM Modi also called for “outcome-oriented” momentum in Indo-German ties and a “quantum jump” in economic relations of both nations.

PM Modi after holding talks with Merkel added, “The pace of development of our relations is fast, direction is positive and destination clear. Germany will always find India as a powerful, prepared and capable partner.”

Modi, who along with Merkel held the fourth India-Germany Intergovernmental Consultations (IGC) to set a roadmap for the bilateral strategic ties, said they conducted a comprehensive review of bilateral relations. “We are looking at outcome oriented momentum in India-Germany ties and a quantum jump specially in economic ties. We had wide ranging discussions today. India-Germany partnership will help our nations and also help the world,” he said.

On her part, Merkel said India has proved to be a reliable partner and the two sides have been able to deepen cooperation.

Talking about the threat of terrorism, Modi said humanitarian forces must unite to combat the menace.

Earlier, Modi was accorded a ceremonial welcome with military honours at the Chancellery, the office of the German Chancellor, where he was greeted by Merkel and senior German officials. Modi received a guard of honour and was welcomed as the the music choir of the German Army played the Indian National Anthem.

My Story: Whenever I Stepped Out, I Was Afraid I Would Have To Go The...