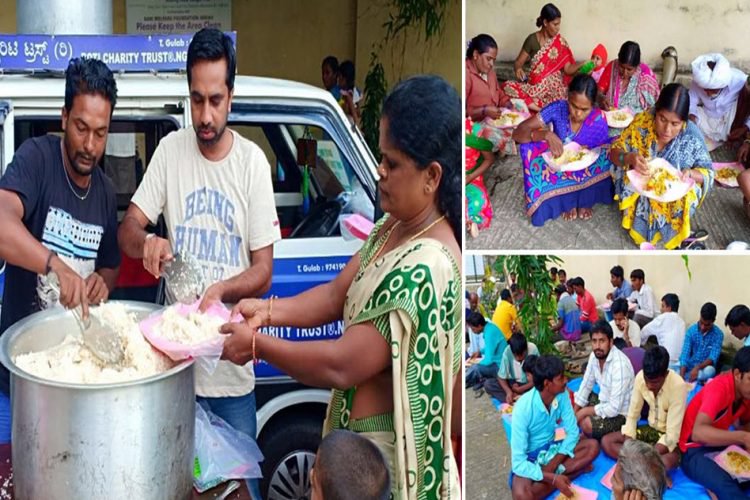 People sleeping on pavements outside hospitals is quite a common sight in India. Trying to afford proper healthcare for their loved ones, many people cannot spare money to feed themselves.

For example, outside the majestic looking building of Medical College and Hospital, Kolkata, one can spot numerous people sleeping and practically living on the pavements as their loved ones are inside the hospital. They cant afford to buy food or get shelter for themselves.

This scenario is far too similar across the country. Syed Gulab, a 39-year-old former wall painter, and now a motor vehicle insurance agent from Bengaluru was deeply moved after seeing this. He understands that for these people to take care of their ailing loved ones, they need to take care of themselves too. Nearly three years back, he started a free food service in front of Rajiv Gandhi Institute of TB and Chest Diseases in Someshwara Nagar, Bengaluru.

“When I first started it, along with a few friends, we would give food only on Sundays,” says Syed. He says that the canteens usually remain closed on Sundays and many roadside eateries also remain closed. Hence, he thought Sunday was the perfect day to provide them with food.
Good deeds never go unnoticed

People hard for money would come and eat at the stall every Sunday. Initially, they were feeding 250 people on Sundays. “Some people would also keep some food for the night. This Sunday service went on for six months and then I met Azhar Maqsusi,” says Syed Gulab.

Azhar Maqsusi is a 36-year-old man from Hyderabad who has been feeding destitute people every afternoon for the last six years in Hyderabad’s Old City. After Azhar got to know about Syed’s initiative, he got in touch with him. A grateful Syed Gulab says “Azhar has been sending 30 bags of rice every month to help me. Thanks to him, the Sunday service became an everyday service.”

As of now, more than 350 people eat every day. Syed has rented a small house near Jayanagar, Bengaluru where he usually stores all the raw materials. There is an Oriya cook who wakes up early every morning to cook the meal. A van then at 1:30 pm leaves for its destination with the food.

“By 2:00 pm we reach in front of the hospital. Many people start waiting in lines from 1:00 pm. Some people stay without breakfast with the hopes that we will provide them food. The food usually gets over within 30-45 mins,” Syed says.

Syed Gulab further says that he or his friends have never asked for donations from anyone. Yet, after seeing and getting to know about his service via Facebook, many people have contributed whatever they could to help this initiative.

“It is an expensive journey, but thankfully, we never faced a crisis. Maybe because it is a matter of somebody’s food and hence, God has been looking upon us and giving us the strength to go on,” Syed Gulab says emotionally. ‘Will never stop this’

Even during the Holy month of Ramazan, Syed and his friends never stopped their service. “Rokne ka sawaal hi nahi baanta” (There is no question of stopping the service). Come rain, come storm, they are always ready with food.

The Logical Indian appreciates Syed and his friends for feeding so many hungry mouths. We also would like to appreciate Azhar Maqsusi for helping Syed out by sending 30 bags of rice every month. We hope that this service is never stopped and help keeps pouring from everywhere all the time.

Trading and Finance after Brexit