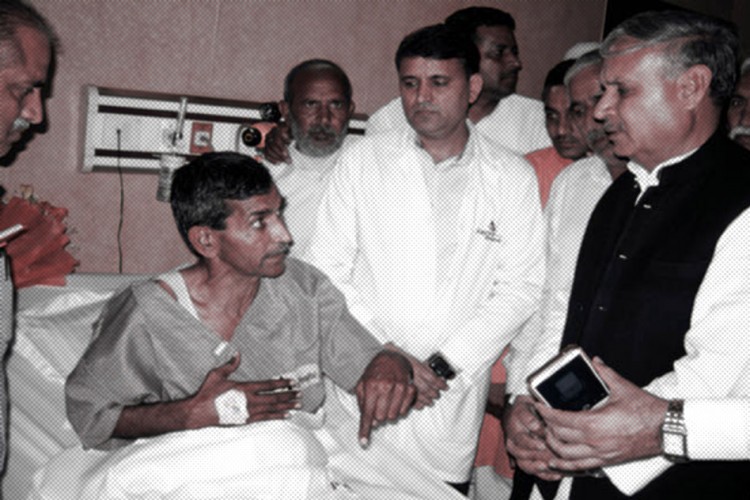 In a rare display of valour and devotion to one’s duty, a security guard in Haryana saved a bank from getting vandalised by hundreds of Jat protestors, even risking his life when the bank was set to fire. Hawa Singh Yadav was on duty in the Jhajjar branch of State Bank of Patiala when Jat protestors tried to enter the bank and loot Rs. 137 crores of money from its lockers. Earlier the protesters looted the alcohol shops near to the bank and tried to burn down the atm, but they failed. Then they approached the bank, when they saw the security guard has locked it from inside, they started throwing petrol bombs. Hawa Singh started firing on them, killing one of the rioters which infuriated the rioters.

After facing the brave Hawa Singh who put his tooth-and-nail in blocking the entrance of the bank, the protestors torched the bank building and went away. Hawa Singh risked his life through fire and doused it in time, only to hurt himself badly. When he was brought to the RV hospital in Gurgaon, his lungs were filled with smoke and he was breathing heavily. The doctors managed to take control of the situation, and thankfully he is in a good condition now.

It is heartwarming to see Mr. Rao Inderjit Singh, the Minister of State for Defence, personally visiting Hawa Singh in hospital to take account of his state. He applauded his splendid efforts of carrying out his duty with complete devotion and not running away from it. He directed the govt officials to make residential arrangements for him near to the hospital till he recovers, so that he can easily visit the doctors for a checkup after getting discharged. Since Hawa Singh’s parents are afraid that they can be attacked by people protestors, the minister also assured them of police security. He said that he will recommend his name for the Bravery Award so that his exceptional efforts can be officially recognized and remembered for a long time.

The real test of a man’s character comes in desperate times when his own life is at stake, and he has to choose between performing his duty and running away. Hawa Singh passes the test with flying colours and has set a wonderful example for people to follow.

The happiest people could be the most depressed on the inside and you may never find out.