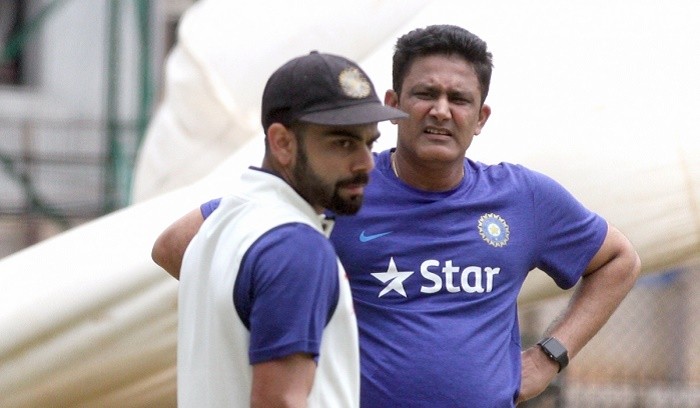 The dressing down Kumble gave his players was really bad, Virat Kohli says. After that Anil Kumble, resigned his high profile job as coach of the Indian cricket team.

Ever since, one trending topic, is ‘what made Kumble quit as coach’. Allegations are that Kumble has treated his players not like players, but ‘like school kids’ by scolding them in that manner. Kumble has many reasons for this, the main being that the caption, Kohli had being having strong reservations about his style of playing the game. He has listed circumstances and reasons for quitting the post.

On June 18, 2017, at the Oval, the Indian cricket team lost the ICC Champions Trophy, to Pakistan. They played a disappointing game and while the team were feeling this terrible loss, they were scolded badly like kids, by the coach, Kumble. Virat says, that he is very possessive about all his players and did not like Kumble’s dressing down in the dressing room. On 20th June 2017, Tuesday, Kumble stepped down as coach of the Indian cricket team. Many say, that it was destiny that both Kumble and Kohli fell apart.

With his over-bearing attitude, Kumble gave the players a earful after the humiliating defeat after which relations between the coach and captain Kohli have broken down. Kumble felt that the Indian team has meekly surrendered to Pakistan in the finals. Now it seems there is no chance for this fractured relationship between the captain and coach.

A leading newspaper reported that instead of handing Kumble an extension, BCCI has initiated process of inviting applications for a new head coach. It seems that BCCI is not very comfortable with power enjoyed by Kohli, in the Indian cricket team.

Since quite a long time, now, differences between the captain and coach, had been doing the rounds. Since last 6 months, both have not been on talking terms, which had surprised BCCI – The Board of Control for Cricket in India. Kumble wanted Kohli to bat and add runs but instead he opted to field in the final. Since long there have been issues regarding control in the dressing room.

Virat Kohli in the mean time is preparing himself for the cricket series against West Indies. At that moment, the India team was leaving for West Indies. Kohli has not responded to this issue at all till now.

Sunny Leone launches her new app, will now communicate with her fans even better

A Doctor Who Not Only Cured Malnourished Tribal In Melghat, Maharashtra But Also Eradicated Poverty

Flip Side of Life

10 Of The Dumbest Things Celebrities Lied About