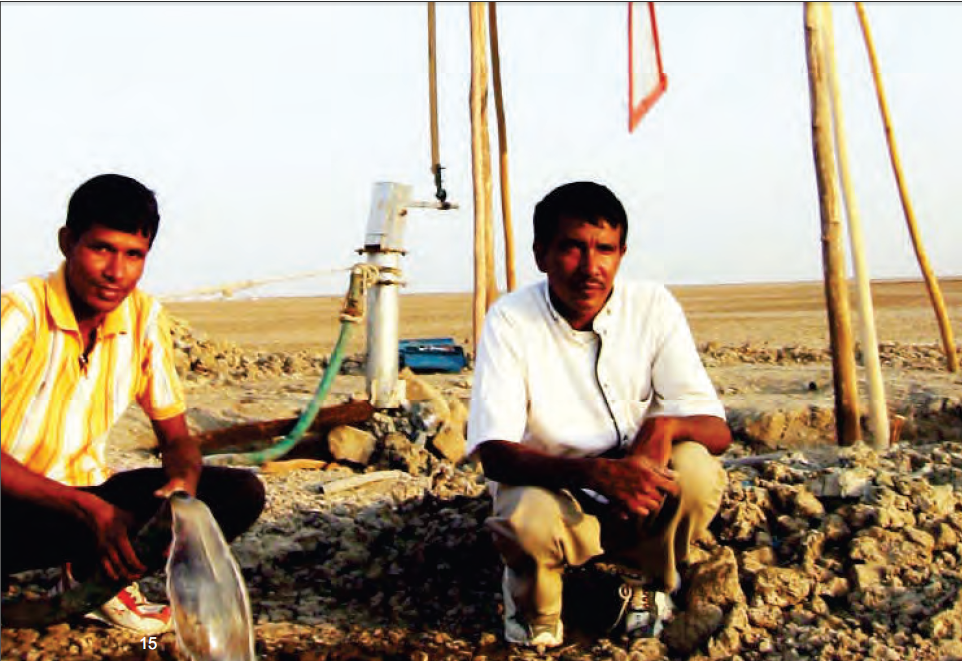 Mohammad Methar Hussain and his brother Mushtaq Ahmad from Darrang district in Assam grew paddy in the winter season (also known as bodo paddy). Irrigation involved a lot of manual effort and using diesel sets for pumping  water was a huge drain on the resources. To tackle this issue, Mehtra thought that if they could run a large wheel on wind power, and connect the wheel to the hand pump, that would serve their purpose quite efficiently.

So, both of them started working on making a windmill unit from locally sourced materials such as bamboo wood, strips of old tyres, pieces of iron, etc. With the help of a carpenter, the first prototype was ready in four days. Since the supporting framework was composed of bamboo, the final product costed Rs. 4500, vis-a-vis the commercially available wind mills which cost over Rs. 60,000.

India is the third largest salt producing country in the world with an average annual production of about 157 lakh tonnes. The Little Rann of Kutch (LRK) supplies 21% of the total salt production of India.

Salt workers, known as Agarias, are some of the poorest people in the state. Agarias mostly used counterpoise, a method that requires two people, one for lowering the counterpoise and other for straining the water. Some of them started using diesel pumps, but the exorbitant machine and fuel costs made a huge dent in their already diminishing returns from salt farming.

Based on the feedback received from salt farmers, GIAN W improved the design and developed a multi-dimensional model which was installed at LRK in 2008. Understanding the diverse needs of farmers to increase the efficiency of windmills, GIAN W joined hands with Alstom foundation for design modification and improvement.

As of 2012, 25 of these windmills have been installed in Kathivadar and Kadiali villages in Amreli district.

Benefits of the Windmill Pump

Thanks to the windmill pump, now salt farmers don’t have to slog for hours with the water pump. The windmill pump saves about Rs.50,000 worth of diesel in six months. It has decreased salt farmers’ reliance on manual labour resulting in savings of about Rs. 28,000 per season per person. Farmers can now easily recover their investments within the harvesting season.

The innovation would also result in the reduction of five tonnes of carbon emissions for every 100 tonnes of salt produced. As per NIF, on an average, every windmill-powered hand pump should generate five Carbon Emission Reductions (CERs) certificates worth Rs.3750.

Every rupee saved and milligram of carbon emission reduced is a glaring testimony of how rural innovations impact the community, society and the world at large.

In the next phase, GIAN W plans to erect more windmills in other parts of Gujarat. The salt farmers of Gujarat are indebted to Mehtar and Mustaq for making their lives more efficient and their occupation, profitable.

Benefits of Swimming as an Aerobic Exercise