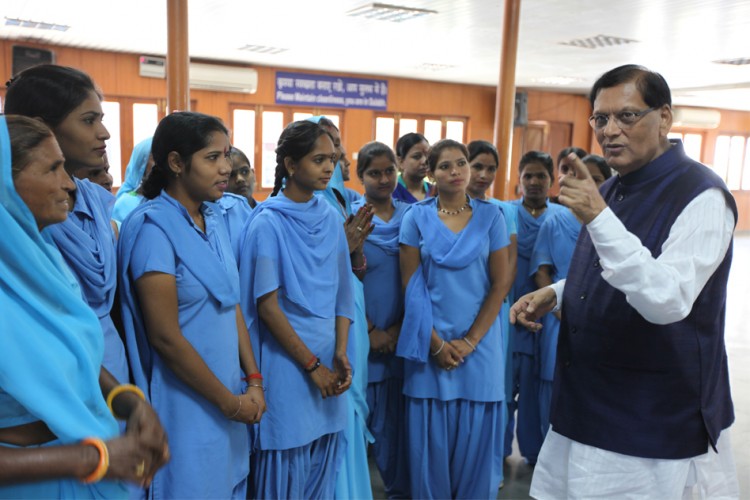 Dr. Bindeshwar Pathak is a great humanist and social reformer of contemporary India. He is an icon of sanitation and social reform who has made a difference in the lives of millions of people. With his efforts erstwhile untouchables have been allowed by the society to intermingle with them and to live on par. He has created a new culture which embraces the poor and extols the dignity of labour.

Dr.Bindeshwar Pathak was born on April 2, 1943 in a Brahmin family of village Rampur Baghel, District Vaishali, Bihar. He pursued Masters degree in Sociology and English, followed by Ph.D. in “Liberation of scavengers through Low Cost Sanitation”. Dr. Pathak also completed D.Litt. on “Eradication of Scavenging and Environmental Sanitation in India–a Sociological Study”, from Patna University.

After his college education and some odd jobs that came his way, Dr. Bindeshwar Pathak joined the Bhangi-Mukti (scavengers’ liberation) Cell of the Bihar Gandhi Centenary Celebrations Committee in 1968. It was then that he was intimately exposed to the problems of scavengers in India. Dr. Pathak travelled all over the country, visited and lived with scavengers in their bastis(slums), studied their habits and social mores (doing his Ph.D. on scavenging), their history and geographical spread and eventually declared that scavengers were a special class united in their miseries and social degradation. This caused an emotional outburst in him which inspired him to develop a technology which has become a credible alternative to scavenging in India. Dr. Pathak observed after studying scriptures that scavenging has no religious sanction and, hence, those who practise untouchability commit a sin. It is unproductive and revolting to manually clean excreta and the waste that is dumped can be profitably recycled to raise farm production and produce biogas. He, subsequently, demonstrated this successfully.

The harmonization of theory and practice distinguishes the Sulabh Sanitation Movement, which he launched to fight the evil of scavenging and untouchability. It is an indigenous concept based on experience and tested scientifically, combining in itself an appropriate technology and a demand for social morality.
He not only studied the social evil but provided its categorical solution through a low-cost toilet technology and developed a self-sustaining sanitation system across the country. In the process of providing an alternative to scavenging and rehabilitation and social upgradation of scavengers, Dr. Pathak created a pan-Indian network with 50,000 volunteers and launched what is popularly known as the Sulabh Sanitation Movement.

• Dr. Pathak developed a technology of two-pit pour-flush toilet, popularly known as the Sulabh Shauchalaya System, which is an appropriate, affordable, indigenous, and culturally acceptable technology. This technology has been declared as one of the Global Best Practices by UN-HABITAT/UNCHS (United Nations Centre for Human Settlements) and recognized and approved by various other national and international agencies.

• More than a million bucket toilets have been converted into Sulabh Shauchalayas, liberating nearly more than a million scavengers from the subhuman occupation of cleaning excreta of others and carrying it as head-load.

• The erstwhile human scavengers have been rehabilitated in different vocations with their human rights and dignity restored. Their sons and daughters are being imparted quality education and vocational training to bring them in the mainstream of society.

• Dr. Pathak is the first person in India who has got constructed more than 7,500 public toilets in slums and at public, religious and tourist places and maintained them on a pay-and-use basis, without putting a burden on the public exchequer.

• Dr. Pathak has also developed a technology for complete recycling and reuse of human excreta from public toilets. In this technology, biogas is produced by anaerobic digestion of excreta, which is used for cooking, lighting, electricity generation, etc. Biogas plant effluent is treated by a simple method to make it colourless, odourless and pathogen-free, making it quite safe for reuse or discharge into rivers or any water body.

• For the bio degradable organic waste, Dr. Pathak has developed a convenient technology that takes only 10 days to degrade the waste.

Dr.Bindeshwar Pathak has been awarded with numerous honours like International Saint Francis Prize, Padma Bhushan and many others.
After Gandhiji, Dr. Pathak is the man, more than any other in India, who has championed the cause of adequate sanitation and made the uplift of the untouchables a mission of his life. The New York Times, in its article, ‘Untouchables Gain the Help of a Brahmin’ (Nov. 13, 1989), hailed Dr. Pathak as a “fulltime crusader against the humiliations of untouchability.” His contribution in abolishing the inhuman practice of scavenging is seminal and unparalleled.

“What Abraham Lincoln did for Blacks in America, Dr. Pathak has done for scavengers in India. Both are great redeemers.”–Dr. Mulk Raj Anand.