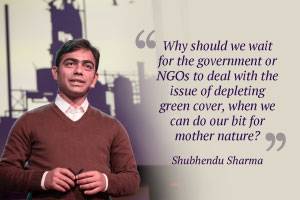 In just a few years as an industrial engineer, Shubehendu Sharma has created around thirty self sustainable forests in India using Miyawaki technology. If anyone wishes to make a forest in the backyard, he can make one with ease. He had a high paying job but decided to grow saplings and plant trees.  In just four years he created 48 forests successfully. He believes that anyone can create a forest on any kind of land, using the open source internet based platform he is creating. The technology he is using allows people to bring nature closer to home.

Shubhendu was working at a Toyota plant to assist Akira Miyawaki, a naturalist. Forests from Thailand were regenerated using the Miyawaki’s technique. Sharma began experimenting, used soil amenders and made some modifications and devised an Indian version. In just one year he created a beautiful lush green forest in Uttarakhand, in his very own backyard. He planned to launch an initiative full-time with the confidence he gained, on making the forest.

He gave up his job and for a year, he researched on the methodology. In 2011 started an end-to-end provider Afforestt, to create native, maintenance free, wild and natural forests after much enthusiasm, extensive research and planning. With extensive research, convincing people, identifying clients, he was successful in this one-of-its-kind initiative. He was successful in creating a scenario where instead of purchasing fruits or veggies from the market, plucking them from a tree from the backyard became a lot easier.