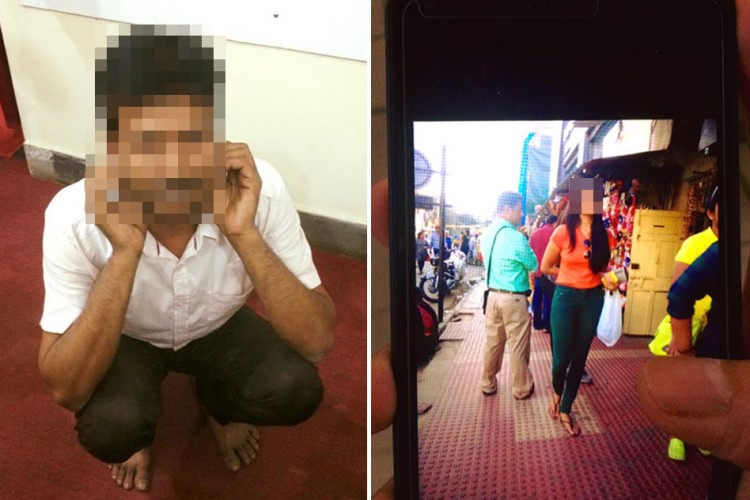 So there I was, shopping on Commercial Street around 4:45 PM, with three of my friends walking ahead. I just looked up to see this man – approaching from the opposite direction – take my picture on his phone. The flash went off and he quickly lowered the phone, trying to walk away. It took me a second to blink and realise what happened before I ran after him, screaming at him to stop.

His pace quickened and he nearly took to his heels, but I waylaid him at the corner next to Krishniah Chetty and snatched his phone. He had managed to lock it and pretended not to know the passcode; I began yelling for him to show me the picture gallery, asking how dare he click my photo. Hands trembling, he answered with a shaky voice, “Sister, I have not taken any photos. Why will I do such a thing?”

I insisted he showed me the gallery, but he pretended not to know what I meant, so I grabbed the phone and went through it anyway. I was aghast to find not just my photo (which he clicked moments earlier), but almost 20-25 photos of other random women he had snapped on the same street in the past few hours.

I lost it and began screaming at the top of my voice. Of course, a crowd gathered (mostly out of curiosity and little else) and my friends also rushed up to us. I flagged down a passing traffic constable and explained the situation to him; he immediately informed his law-and-order counterparts and I accompanied him as he brought down the man to the Commercial Street police station. I phoned my colleague too, who came by to help immediately.

We were met there by the staff and police inspector, who listened very patiently and found out that the pervert’s name and that he is a native of Kolkata. An employee of a sales and marketing firm in Chennai for the last six years, he is 40 years, apparently unmarried and had moved to a rented house in Kamakshipalya, Bengaluru a month ago.

When asked what he had planned to do with the pictures, he stayed mum – but cops said he would have circulated them on Facebook and WhatsApp and maybe even morphed the images on various websites, as many of these people tend to do. A case was registered against him, and we left around 7 pm. The cops, of course seized his phone (and another one in his pocket) along with a bunch of documents he was carrying for evidence.

The point of this rant? Having written countless stories about women being harassed in public places by such people, it was a jolt to actually experience something like this myself; but I’ve learned that we cannot keep quiet.

Far too many women stay silent or brush aside such incidents, thinking there’s no need for the unnecessary drama – but they couldn’t be more wrong. If we don’t stand up for ourselves and take action against such an invasion of our rights and privacy, they will never stop.

So please, ladies, don’t be afraid to take appropriate course of action when faced with such circumstances, please don’t tolerate it.

My Story: Whenever I Stepped Out, I Was Afraid I Would Have To Go The Washroom

The journey there and knowing that you have someone to unconditionally share it all with.”